A spectacular SEGA MOBA with an anime look Advertisement
Revolve8 is a MOBA for smartphones that challenges you to participate in online rounds where your objective is to get rid of your rival by destroying their watchtowers. To do so, you'll have a deck of cards available to you to help you invoke your army on the battlefield.

Rounds last three minutes, which should give you enough time to destroy the main tower and win (but there are two other defense towers that you can choose to destroy or not). Keep in mind that displaying the cards will have an energy cost but it'll replenish as each second flies by.

Although its anime look permeates every corner of the game and provides it with great charisma, characters are clearly inspired by popular folklore. Little red riding hood, Cinderella, Sinbad the Sailor or Lilliputians are just some of the troops that you get to control.

Revolve8 is a spectacular strategy-based game launched by SEGA in its efforts to wiggle themselves inside the complex world of competitive online strategy. The game also includes a single player story mode that challenges you to unlock each character's story beyond their participation in subsequent leagues. Revolve8 is definitely a game that's worth a chance.

Requirements
Android 6.0 or greater is required.

Why is this app published on Uptodown?
(More information) 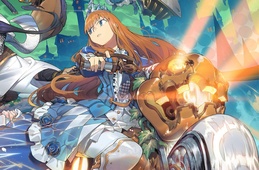 Feb 7th, 2019 Revolve8, the great MOBA from SEGA can now be played on Android